It was one of the first class periods I was teaching on my own. I had spent hours meticulously working on my lesson plans, making sure each aspect of the lesson was planned out and properly prepared. My class period was to be held from 12:50 – 2:00pm, in the heat of the day. I had been teaching for about 30 minutes and things were going well, when the storm clouds rolled in, and the cool breeze picked up. I didn’t think much about it other than the fact that the cool breeze felt very refreshing. I didn’t think much about the storm clouds, but as soon as it started raining, things were abruptly brought to my attention.

The school building is no more than brick walls, wood rafters, and a tin roof. The rain 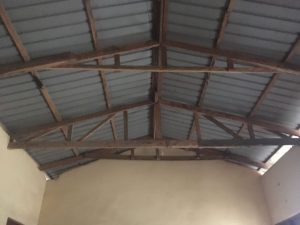 came down hard, and fast, and within a few minutes, it was nearly impossible to hear anything other than the rain coming down in sheets onto the tin roof. This moment instantly brought me back to being on the farm at home in Iowa, working with my dad and brother. It brought me back to a similar summer day, we were working on something outside on the farm yard. It began to rain in a similar fashion as it was here in Ghana, so we headed for shelter in the old machine shed on our farmyard. When entering the machine shed, our communication came to a halt, just as it was in my classroom in Nyamekrom, Eastern Region, Ghana.

So here I am, back with 40 students in the JHS Form 1 class, all looking out the windows, laughing and smiling at the rain. They know that class will not continue as it is supposed to as long as the rain is coming down. So what do I do now? I had this all planned out. I thought my lesson was going to go perfectly, and now it has come to a screeching stop. This moment represents many of the hurdles I have encountered here in Ghana. Plans often fall through here, something comes up, something changes, and that’s life. Not only does this happen in Ghana, but it occurs in my life at home as well. It is simply a more common occurrence here in Ghana. When life throws you a curveball what are you going to do? How do we respond to this? These changes in plans really show a lot about a person’s character. When something doesn’t go our way it’s easy to think about quitting, giving up, and moving on. But in many cases it’s more about pressing forward, trying again, and working towards the goal you initially set out to achieve. 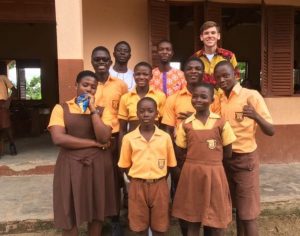 Because the hard rains continued throughout the remainder of my class, I wasn’t able to finish my lesson as planned. However, we finished up with some notes on the board and then played a slow, yet fun review game on the marker board. The next time I had the class I was able to finish the lesson with success. The rain on the tin roof may have stalled my lesson, but in the end we were able to accomplish the goal we had set out for.

Our plans had changed in the classroom, just like the memory of being rained out on the farm in Iowa. The same way our plans were adjusted in the classroom, that day on the farm we weren’t able to finish our work outside. But we made the most of it and began repairing the valve leak on the John Deere 4020. It wasn’t our initial plan, or goal for the day, but we compromised, moved on, and finished our outdoor project later.

Life isn’t always going to go as planned, no matter what we try to do. Despite failures, hurdles and changed plans, it’s important to keep moving forward. If your plans have to change, that’s fine, just roll with it, adjust your initial actions, and keep striving with the end goal in mind.

Mitch Rozeboom is an Agribusiness graduate from Dordt College. Before serving as an AgriCorps Fellow Mitch interned at the Chicago Board of Trade.