On the night after returning from a long trip back to Koforidua from the Centre for No-Till Agriculture (CNTA) in Kumasi, I took some time to gather all my thoughts and reflect about the events that took place over the past week and how much knowledge I have gained from that experience. I went outside to take in the cool night air. I went to a place where I could just be alone, with no outside factors interrupting my thought, complete solitude. However, with the usual dogs barking, taxi horns honking, and neighbors speaking loudly over things I cannot understand, solitude is not very common in Ghana. Nevertheless, this evening was different. There were no dogs barking, neighbors were silent, and no taxis were close enough to be heard honking. I took that moment in to just breathe, relax, and to be present. The next thing I noticed as I looked up at the night sky was the vast number of stars, stretching as far and as deep as I could see. It was one of the most peaceful moments I have been able to take in while being here in Ghana. I just closed my eyes and felt the breeze blow past my face, cooling, refreshing, and delightful. Closing my eyes for just a few moments which turned into minutes and then re-opening them to the world around me, I felt so much peace and tranquility like I have never felt before. Being just one small thing on this Earth while so much more goes on around me. Although, at this time, it was just me, the stars, and my thoughts.

During our training at the CNTA I had a similar experience to this. Dr. Kofi Boa, the CNTA Founder and Executive Director, 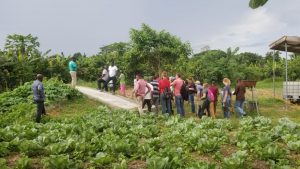 shared his thoughts and his story about how he became so passionate in the field of conservation agriculture. It was the third and final morning of our 3-day training, and all the participants were gathered together at the outdoor classroom. Some were sitting, reading up on their guidebook for the day’s lesson, while others were networking and chatting with their new-found colleagues from varying regions of Ghana. As we all took our seats and began the lesson of the morning, a question was raised from one of the participants in the back of the classroom. His question, roughly translated from the local Ghanaian language, was something along the lines of “How did you begin with conservation agriculture.” The question being directed towards Dr. Boa. Politely, he obliged to answer the question and began with telling his story. He started of this story by repeating a line we heard him say earlier and throughout the week, “to close your eyes”. This had previously been mentioned by him as closing your eyes to the crops above the ground and adhering to the soil below, pointing out that the soil heath and fertility is where the majority of agricultural processes take place.

Dr. Boa’s story this morning was much more than just closing our eyes to the fruits of our labor, or the crops that we may be trying to grow. He took us all the way back to his childhood and explained that his passion and drive for conservation agriculture began around the age of 8-years-old as the cocoa farm planted by his mother was burnt to the ground as a neighboring farmer was using the slash and burn method to prepare his land for the upcoming cropping season. Slash and burn is an agricultural method widely that involves clear cutting forested land and any remaining vegetation is burned, resulting in bare land for planting crops. Dr. Boa shared that this was a devastating loss to his family, as it was their only source of income, providing them with the amount of money to be able to attend school and pay school fees. It was their livelihood. It is what they relied on to survive. After losing this farm from fire, and unsustainable farming practices, Dr. Kofi Boa made it his personal mission in life to never let anyone go through the pain and loss that he had to suffer at such a young age. Since then, he has devoted his life to conservation and sustainable agricultural practices. I sit here now going through everything that Dr. Boa told us about his life. He chose to not let a terrible incident so early in his life deter his love for agriculture and his own passion to pursue a career in something that was so close to his heart. 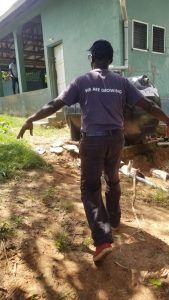 Still outside under the stars, eyes open wide now, I realize now that sometimes we must close our eyes to see things we may not always fully understand and to reflect upon those things we have experienced. It is something I do routinely to keep myself grounded and to appreciate all the amazing opportunities I have been blessed with in my life. However, as Dr. Boa put it, we must close our eyes to find and to understand things from the fundamental standpoint. In his case it is the soil, which is the most essential component to his life as a farmer. Think about it for a minute. How easy is to close our eyes to things we don’t want to see or don’t want to deal with to get it out of our heads? This isn’t like that at all. Instead, closing our eyes to open them again with a new outlook, a new vision, on something we may be familiar with but may not have the best perception of. When we close our eyes in this sense, we may find out something we missed, something we overlooked. When is the last time you closed your eyes, thought deeply about the reason you do something a certain way, to open them with a new found light or perception that you never previously thought was possible? I’ve chosen to close my eyes, and open them to a whole new world. Will you?

Kelse Brown is an Agricultural Education graduate from The Ohio State University. Before serving as an AgriCorps Fellow Kelse worked at the Georgia FFA Summer Leadership Camp.