As I am making my daily trek up the mountain to get cell service, my shirt is soaked from the beaming heat of the afternoon sun and the stifling humidity. Feeling absolutely miserable, I begin to hear my phone’s familiar “ding” as the once patiently waiting messages now begin crowding into my inbox, and I know I am finally reaching the area where I’ll be able to talk my folks. As I’m doing a video chat with them, they ask to see what the area around me looks like, so I turn the camera around and show them the mountains and valleys that surround me. When the call is over, I find a rock and take some time to sit there and stare out on the view I just showed my parents. This view reminds me a lot of life and how in my time as a Fellow with AgriCrops, there are highs and lows to it all. 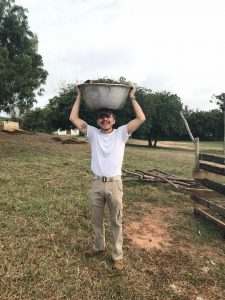 Immediately upon getting into Korm, I was hit with a series of lows. My living conditions were bad; even more so than in my deployments with the military. There is no running water and no electricity. My toilet consists of a hole in the ground, and I use a bucket to shower as well as wash clothes. I have to limit my time on my computer and phone as my only electricity source is the school, and I have to walk 40 minutes every day to get cellular service. My bed is just a thin mattress on the floor in a sauna of a room. Many of the other AgriCorps Fellows over here experience some of these same difficulties, but it seems that I’m the only one that has been blessed with the complete combination. I felt like Rocky Balboa when he was fighting Ivan Drago, and no matter what I did, I kept getting punched in the gut. He had just gone through one of his all time lows with losing his best friend Apollo, endured weeks of training in the Russian wilderness, and now was in the ring against the biggest man he’s ever fought; yet even as Rocky was being pounded, he endured and continued fighting. The beautiful thing about valleys though, is that they are in the middle of mountains.

On one of my first days, I met with my headmaster and we discussed our big ideas that 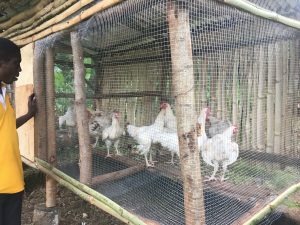 we wanted to accomplish while I’m here. We want to get a chicken coop built then fill it with chickens and also get a couple sheep for the 4-H club. To my delight, those projects are now starting to get some traction, and it looks like they will happen sooner than expected! I’ve also been able to get up and teach a few times a week. My first opportunity was completely unexpected, so I did some quick preparation on the subject after which I did a quick prayer. The class went way better than I had expected it to go. It’s experiences like this that have motivated me to continue digging into the Bible like never before and deepening my relationship with God.

I did the same as Rocky; I kept on getting back up and fighting through the punches that were coming my way. In the end, Rocky was hoisted in the air victorious. Eventually through perseverance and reliance on God, I am confident that I will put my “Drago” on the mat, and as I find myself standing on the mountaintop, I’ll be able to appreciate the beauty of the lows. I have been learning a whole new reliance and dependence on God that I’ve never experienced before. A close friend reached out to me when I was in one of those lows and sent me a verse that I’ve been mediating on quite a bit: Psalms 112:7-8, “They do not fear bad news; they confidently trust in the Lord to care for them. They are confident and fearless and can face their foes triumphantly.” I’m realizing that I have no chance of doing this on my own; I have to lean on the Lord and those around me.

Just as the mountains and the valleys make for a beautiful view, the highs and lows of life do the same things. You have to take a step back and see the whole picture of it. When you do see it all together, you realize its all part of God’s grand masterpiece.

Justin Monroe is an Agribusiness graduate from The Ohio State University. Before serving as an AgriCorps Fellow Justin served in the U.S. Air Force.