I will be the first to admit that I have a ‘guns a blazing’ attitude towards life. I like to get into a situation, put everything I have into it and get out. I came to Sankpala, my community, with this same attitude towards this new adventure. I thought by month two we would have started a dry season garden, by Christmas break the 4H club members would have a good handle on parliamentary procedure, and by the middle of second term students would be fighting to become next years executives. As times rolled by these goals began to feel more far-fetched. My first two months came and went with no progress on a dry season garden. Christmas break passed and my officers struggled to run a meeting. The worst, when executive elections were announced only 4 students initially applied for positions.

I poured my heart and soul into the 4H club why had my goals not been met? What was I doing wrong? In true AgriCorps style I reflected on the situation and talked to my friends around me. While reflecting on my own I had to the conclusion: I had failed. Everything I had done up until this point was incorrect and I needed to do something different. After talking to Mark, another Fellow, he pointed out that progress is slow, and in our situation even slower. We are not here to change everything in one year but we are here to make little changes that in turn will have lasting impact. After hearing this I reflected again and realized there was small changes to be celebrated. 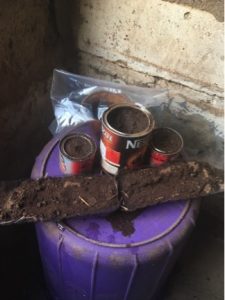 No I wasn’t able to start a dry season garden but Mercy, my co-advisor was able to teach the club about growing vegetables in old jerry cans at home. I showed her this trick a few months in and she was able to grow beans to feed to the rabbits she raises. The club members were receptive to this idea and started small projects on their own at home. A few even went home right after the meeting and started planting. No it wasn’t the dry season garden I had envisioned but it was a change that they can do all year around.

As for my officers they may not be masters of parli pro yet but their skills have improved so much over the past 6 months. The secretary, Fatawu, has begun writing minutes, they aren’t always to Roberts Rules of order but he does it with confidence and is proud of it. Kudus, the President, didn’t understand how to read an agenda when we started but is getting more and more confident every meeting. But my shining example and the source of so much joy for me personally is Ryma, the organizer. She is the youngest on the executive team and by far the shyest. English has always been a struggle for her but she was dedicated and was able to learn the opening closing ceremonies, even when her seniors didn’t.

After I learned that only 4 people had applied to be executives, I was disheartened and worried about the 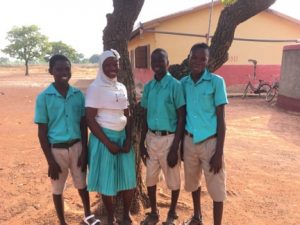 future of the club. I was also told that last year no one volunteered to be on the executive team and the Mercy essentially had to volunteer all of the executives. Having four volunteers was a monumental step from last year- showing that participation and interest in the club was continuing to increase.

This line of work is not about rushing in with a guns blazing attitude but about getting up everyday, saying “lets do this,” and not giving up when things are hard. There are many days where it would be much nicer to sit on the porch and read but in the end that is not what is going to make the difference to the club members or myself. I cannot give up on this work but have to take everything with patience and a healthy dose of humor.

Kaylee received a bachelor’s degree in Animal Science from Chico State University. Before becoming an AgriCorps Fellow Kaylee completed an undergraduate research project that allowed her to travel all over the U.S.